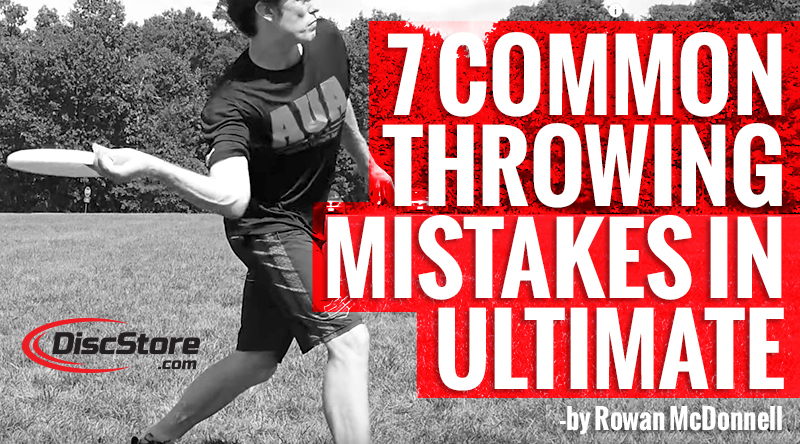 Rowan here! Today I’m excited to bring you a list of some of the most common mistakes I see players making when they throw. While many of these errors come when players are in the learning phase, some of these habits stick with players throughout their playing days. Take a look below and see if there are any corrections you need to make to your form and check out the companion video on my YouTube channel at the end of the article!

1.) Players start with accuracy at the expense of power and spin.

Many players who are new to Ultimate opt for a very conservitative forehand, allowing them to throw accurate 5-10 yard passes to teammates and friends, passing off their forehands as ‘acceptable’. This usually manifests itself in slow, guided forehands and elbows tucked into the body. I recommend having players really reach back and try to throw fastballs out of the gate. It is far easier to dial in the accuracy of a strong forehand than to get power out of a weak forehand. Even in a shorter throw I recommend that you get your elbow off your body and throw the flick like a whip like motion. The longer the throw, the more the elbow kicks back and whips forward!

2.) Players follow through too much, and lose snap on the wrist.

Since this video came out, I’ve probably debated this common mistake more than the rest! I believe that by snapping at the end of your throw, not only do you generate more spin but you do not sacrifice that much power. You might be able to get away with a big follow through if you are doing a forehand pull, or playing disc golf, but we also have a defender to think about. With the mark standing so close, a big follow through makes it tough to throw in a real game. See below on how quick the arm stops after the release, giving the disc extra spin to hold it’s shape throughout the flight.

3.) Players get too fancy with the windup.

Efficient mechanics are essential in every sport. Swinging a bat, boxing, you name it. When we wind up for a flick, we don’t want to get crazy. I see quite a bit of flipping/ twirling the disc around as players reach back. Many times it a habit, how they learned to bring it back, and sometimes it’s intentional because it looks cool. Either way, when the windup has a lot of unnecessary movements, the likelihood of a throwing error occurs.

4.) Players tend to keep their palm forward and push the flick.

It’s intuitive, and simply easier at first to push a flick, palm forward, like a basketball shot. It takes an adjustment period to really train your body to keep the palm up and rely on a horizontal snap to get the disc moving further and with more spin. Another problem with the palm forward approach is that the disc tends to come out with more wobble, slowing it up throughout the flight. “Palm up” is the most common advice I’ve ever given to a player working on their throws, ever. In the GIF below you will notice how the tip of the middle finger, palm, and forearm are all parallel with the ground!

Now that we’ve gone over a few common mistakes on the forehand, let’s proceed to the backhand side!

The airbounce is a trick throw, not a game throw. Yet many players still use the airbounce backhand as their default backhand! While the throw looks cool, and does have some benefits: the ability to throw under a mark, and a lower release point, it shouldn’t be used in Ultimate. Downwind, the airbounce will get pushed into the ground, and upwind, we risk the disc popping up too much. Quite simply, there isn’t as much control over the full flight, take a look at the GIF below.

6.) Players put too much arc and curl into their backhand.

The backhand curl is usually a trait for a very new player, while the arc is much more common in most players backhand. The curl is when you bring the disc to your chest with your elbow sticking out, and throw by uncurling your elbow fast. There is simply no power, and a major takeaway is that your elbow should actually be straighter than you think on a backhand.

Now, for the arc, many players throw a backhand on an arc, see the GIF below. Instead, I recommend that we throw a backhand ‘straight forward’ almost along a perfect line. There will be a little horizontal movement, especially for an around backhand, but in general the straight line gives more consistency, accuray, and you don’t even lose that much power!

7.) Players rely on their arm and body and forget about the wrist on the backhand.

You can’t hide from lack of wrist on the forehand side. You know when you’ve used enough wrist snap, and know when you haven’t. However, on the backhand side, you can mask the lack of wrist snap because you generate so much power throughout your body. Therefore, many players throw the backhand with too much arm/body, and lose focus on the wrist. However, the wrist is the most important part of the backhand. Think back to the part about efficient mechanics. If we have a full swinging backhand, there is a lot of moving parts which may lead to errors. If we can stay efficient, use a little momentum to get some power and have a nice wrist snap, our throws will be crisp and powerful. Check out the GIF below to see the power that can be generated on the backhand side with just the wrist. While I don’t recommend throwing the backhand like this, hopefully it shows you what is possible with more wrist snap on the backhand!

Thanks for checking out some of my observations! Let me know if I missed anything you think should have made the list. Here is the full YouTube video, enjoy!