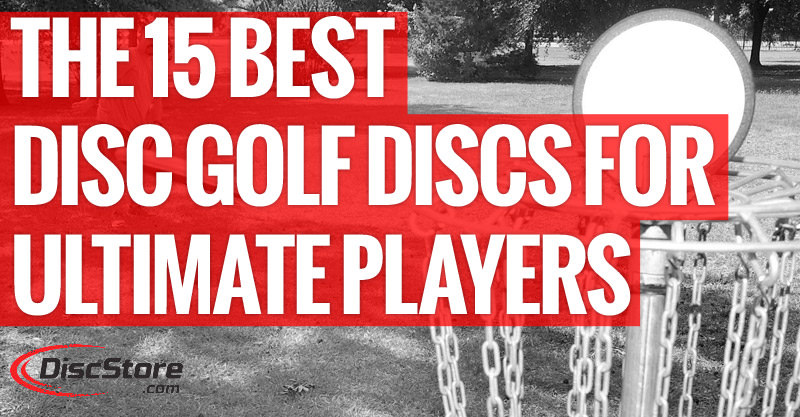 Unlike Ultimate frisbee, in Disc Golf there are many different types of discs to choose from and it can be intimidating deciding on the right disc for you.  There are drivers, midranges, putt and approach discs. Ultimate players are familiar with making one disc do a bunch of different things, whereas disc golfers typically have different discs for different functions and flight paths, measured by a flight rating system. 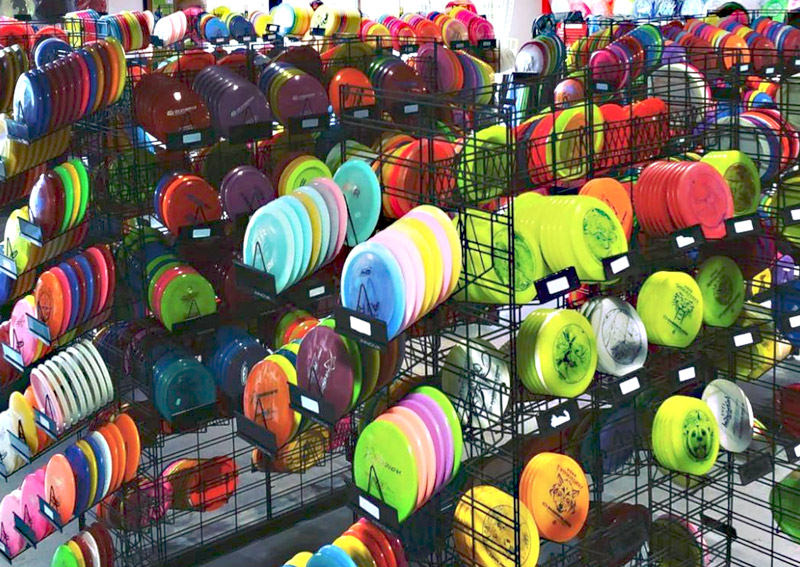 Shown above is a small selection of the hundreds of Disc Golf discs players can choose from at DiscStore.com. Unlike Ultimate frisbee, one disc just won't cut it.

The flight rating system(1.) was first implemented by Innova Discs and gives each disc a number rating based on its Speed, Glide, Turn, and Fade. In order to understand the ratings in the rest of this blog, take a look at the following image. It will help you understand the flight ratings system.

The following details are provided by Innova Discs to help you understand the image better:

Speed: 1 to 14 : Speed is the rate at which a disc can travel through the air. Speed 14 Distance Drivers are the fastest, having the PDGA maximum legal wing width. Faster discs cut into the wind with less effort and are best when throwing up wind. Slower discs take more power to throw upwind, but they’re easier to throw more accurately and may actually go farther downwind. High speed discs are not recommended for beginners as they require more power to fly properly. Glide: 1 to 7 : Glide describes the discs ability to maintain loft during flight. Discs with more glide are best for new players, and for producing maximum distance. Beginners wanting more distance should choose discs with more glide. Discs with less glide are more accurate in high wind situations.

Turn: +1 to -5 : High Speed Turn is the tendency of a disc to turn over or bank to the right (for RHBH throws) during the initial part of the flight. A disc with a +1 rating is most resistant to turning over, while a -5 rating will turn the most. Discs rated -3 to -5 make good roller discs. Discs with less turn are more accurate in the wind. Discs with more turn are easier to throw for beginners.

So now that we have all the ratings covered and have a better grasp on the flight system for Disc Golf, let's take a look at the Discraft Ultra-Star, the official disc of Ultimate frisbee at the championship level.

What is the flight rating of a Discraft Ultra-Star disc?

If an Ultra-Star were to be rated with this flight system it would likely have Speed: 1, Glide: 6, Turn: 0, Fade: 0.  An Ultra-Star is slow and doesn’t require tons of power to get it to fly, meaning it has a high glide.  It will also fly extremely straight and true through till the end of the flight, whereas disc golf discs have varying characteristics of how a throw will finish.  The following selection of disc golf discs are ones that we recommend as a starting point for Ultimate players looking to get into Disc Golf. These were chosen based off the feel, characteristics, and flight patterns in comparison to an Ultimate disc.  Keep in mind that an Ultra-Star is also PDGA approved, so you can absolutely use your Ultra-Star in Disc Golf.

If you're not looking to take your Ultra-Star on the course, take a look at some of these discs we recommend to help you transition from throwing scores to hitting the chains. We picked a few discs of each type to give you a good variety to choose from.

The Warden by Dynamic Discs, is a straight flying, slow, high glide putter, perfect for any Ultimate player looking to get into disc golf. This disc will hold its line well on any Inside-Out or Outside-In releases.  Just like an Ultra-Star, the Warden has a beadless rim to allow for a comfortable grip on the disc. It is also very lofty and doesn’t require a lot of power to fly. 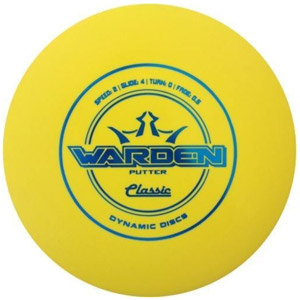 The Aviar by Innova is the most popular disc model in Innova’s lineup.  It is a great disc for short drives, approach shots and slamming chains.  It is the number one putter in disc golf for a reason. The Aviar is a smooth, durable, straight flying disc, and easy to throw.  It’s slow speed, higher glide and lower fade allows for throws to be easily manipulated to any line. Great for Ultimate players that are used to a slow lofty Ultra-Star. 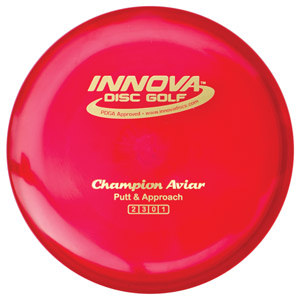 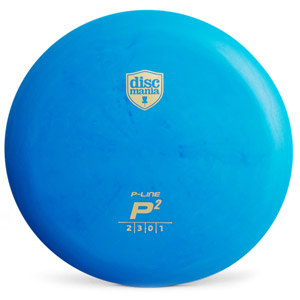 The Dart by Innova is a durable, straight flying putt and approach disc that is quite domey, giving it excellent glide just like an Ultrastar.  The Dart is slightly faster than most putt and approach discs giving it the ability to travel fast through the air. The Dart is a staple from the Innova lineup for its classic frisbee like design.  Based on the flight system, the Dart has nearly the same flight pattern as an Ultrastar, except that it is a faster speed disc, allowing it to cut through the air quicker.

The Roach was originally released as the 2015 Discraft Ace Race disc.  It is a straight flying putt and approach disc with extra glide, which Ultimate players will love. The beadless rim makes it feel great in the hand.  The Roach also has little fade which will allow for throwers to have precision accuracy. The roach is a great straight flying all around disc that would be a great transition disc from an Ultra-Star. 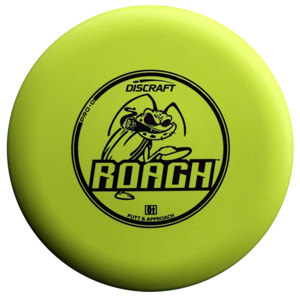 The Axiom Envy is a durable overmold disc that utilizes MVP’s GYRO technology. Overmold meaning two kinds of plastic are used to make this disc.  The Envy is described as a “lid-like” putter. It is a slower putter with a thick wing and deep rim. Ultimate players will find this putter to feel great in the hand for any I/O (hyzer) or O/I (anhyzer) approach shot or drive.  The envy will fly true and straight to any angle it is put on, but will finish with a slight fade back at the end of its flight. Great for more advanced Ultimate players with stronger arm speeds.

The Meteor by Discraft is one of the more beginner friendly  midranges out there. It is an understable disc that will fly to the right when throwing a right handed backhand.  Ultimate players will notice this disc will glide like an Ultra-Star. Throwers with lower arm strength will find the Meteor is great for more control and distance. This classic Discraft mold will feel and throw more like an Ultimate disc than a disc golf disc.  A good choice for Ultimate players wanting to test out some disc golf discs. 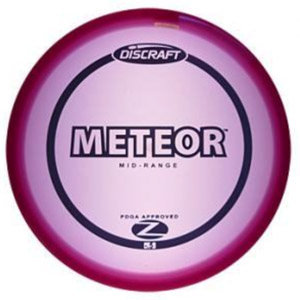 The Mako3 by Innova is a very straight flying midrange disc that finishes with little to no fade.  With the exception of speed, the Mako3 has roughly the same flight numbers as an Ultra-Star. The Mako3 is a perfect disc for throwers looking for disc that will hold any line its put on with precision accuracy. It holds the line you put it on so Ultimate players will be able to shape the same types of throws they are used to on the field. 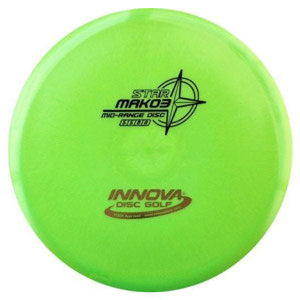 The Nova by Innova is a very straight flying approach disc.  It blends two different types of plastic for a truly unique feel.  The outer edge has a soft grippy plastic that will help grab chains. The inner flight plate is firm, but tacky.  The Nova is one of the best finesse discs that can handle power while providing precision accuracy. The most unique feature is the little slits throughout the rim of the disc.  Ultimate players will love it because it flies exactly how you want it to fly, and has the domey top that gives it that Ultimate disc feel.

The Lat 64 Gobi is the first double mold midrange in the Latitude Line. The Gobi is a quick, straight flying mid range that offers great control for experienced golfers. Its rounded wing and GoldLine plastic rim which Ultimate players will find it feels great in the hand.  It is a consistent and predictable disc that is fast yet stable enough to withstand stronger throwing arms. A great first disc for a more experienced Ultimate player.

The M4 is the most understable midrange disc in the Prodigy line. Even though it has a fairly flat top, this disc has some serious glide.  It is a perfect disc for beginners and throwers with lower arm speeds due to its tendency to turn into the the throw. The M4’s slight fade back at the end fights the turn creating a straight line on nearly any angle you put it on.  A great midrange for Ultimate players off the tee to backhand or flick. 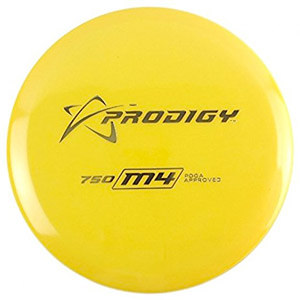 Gateway’s Element is a turning, understable midrange disc that slightly fades out on the finish.  Throw the Element on an IO shot and watch it fly straight, put it on an OI and watch it maintain the turn line throughout the flight. The higher glide of the Element makes this disc easy to throw for all arm speeds. 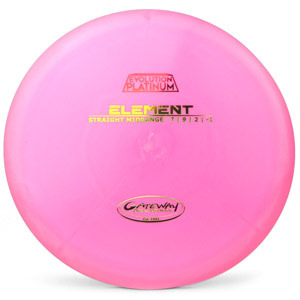 The FD by DiscMania is a wonderful straight flying driver that perfect for all skill levels.  It is an accurate and smooth flying disc with massive glide. It is a good starting driver for Ultimate players because of its lower speed and high glide.  Its lower speed allows for precision control, and its glide allows for maximum distance. The wing is not as sharp as some drivers which will make it feel more comfortable in the hand of an Ultimate player.

The Escape from Dynamic Discs is a moderate speed driver with maximum glide. It works well for consistent controlled fairway drives or wide open drives.  The Escape is a great driver for more advanced Ultimate players that are looking to get into a higher speed disc to match their power. The glide of the Escape  will give the disc a familiar controlled line, but will fade back at the end of its flight. 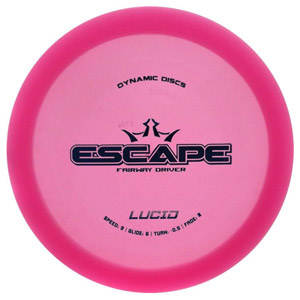 The Shryke from Innova is one of the newest big bomber discs in Disc Golf.  It is an easy-to-throw distance driver that works great for a variety of players.  Though the thick rim, sharp edge characteristics of distance drivers are the least like an Ultra-Star, the Shryke does have maximum glide that makes it easy for throwers of all types to get major distance.  Ultimate players will have an easier time throwing the Shryke than most distance drivers due to its ability to turn and its ability to stay aloft in the air. 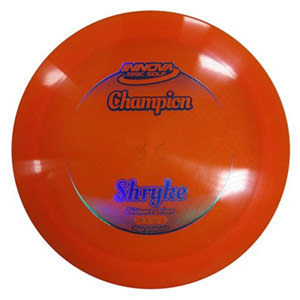 Our #1 Disc Golf Disc for Ultimate frisbee players is the...

We love the Mako3 for a true far flight that is very similar to the Ultra-Star. Ultimate players who get decent distance with the Ultra-Star should easily be able hit 300ft with the Mako3 on a a consistent basis. We recommend you try it out on your next Disc Golf outing, you won't be disappointed.