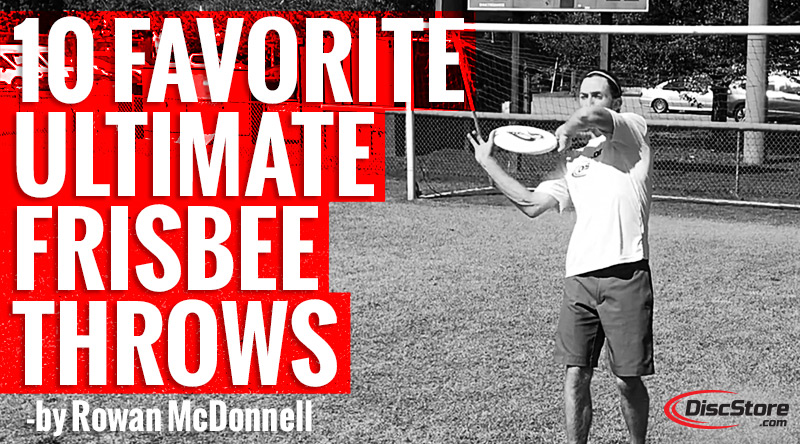 Last year I wrote about the 10 most useful throws in Ultimate. That list contained the classics:

More recently, I released a video with all of the throws I have picked up over the years, totalling 80 different ways to throw a frisbee.  Today, we are taking a look at my favorite 10 throws. These 10 represent the rarest and fan favorites of the bunch. Let’s start the countdown, starting with my 10th favorite and working all the way down to the best throw in the game. Let’s get started!

El Primo, meaning ‘cousin’ in spanish, is the cousin of the bixler, but thrown with tons of force. A backhand step out, with a flick grip and an inverted all come together for this long range throw that comes in like an inside out forehand. While there isn’t many instances you should use this in a game, it is rare in the sense that it travels further than the majority of the trick throws on this list.

The Haxi Maxi is one of the most challenging throws to execute, but surprises everyone. It is a cool way to get the disc off the ground and immediately into flight. However, this throw only works in tall grass, where you can prop the top of the rim upward, so when you push it forward it has an upward trajectory.

Waffle Fries has been the #1 fan favorite, and is always a hit on video. The throw itself is simple, a flick thrown in a backhand stance where you wrap your arm behind your back. The magic in this throw is the delivery, the ability to whip your hand back around so it looks like the throw actually came from the backhand.

Airbounces are so popular right now! They really make any throw look cool. Disclaimer: they aren’t great for actual Ultimate Frisbee, but are great for casual throwing and showing off. Pro-Tip: you can put airbounce on many throws, not just the old fashioned backhand. The beckham is an airbounce vertical throw that bounces from left to right. The Rapinoe, the reverse, kicks from right to left and is another amazing illusion.

The Elevator forehand is the first thow on this list that does have game applicability. It is more or less the same throw as the high release flick, but adding the second hand does two things. It gives it more spin, which gives it a floating look, and also allows it to go up higher, getting over the mark. You can really play with the speed you bring your hands up and get some amazing verticality on this throw.

The Matador was my favorite throw for a long time. It just has run into some tough competition of late. The matador was created by the legendary Joshua ‘Cricket’ Markette. He has used this throw in game before, resulting in a goal. It is a backhand grip that whips around your head. You can dig into the YouTube archives to find Cricket himself teaching this throw.

The bixler is one of the funnest, quickest throws here. While it doesn’t travel far, it is essential that you get this throw down for several reasons. First off, the name is great and it’s fun to say. Second, it comes up in Ultimate sometimes, I’ve used it twice in real games. Lastly, it is a great throw for goaltimate, which is an amazing variation of the sport of Ultimate. Oh and it’s a fun throw to pump fake!

The Body Roll comes from Freestyle, when you throw the disc up into the wind and then roll it around your arms and chest. I realized that you don’t need the wind and the toss, you can just throw a flick directly into your throwing forearm and have it roll around. Getting the disc to come off accurately is a bit of a challenge, you want to have it pop off your shoulder and give it a redirect mac towards your intended target. Out of all 80 throws, this one definitely takes some of the most practice.

Another Joshua Markette special, the Pizza Pie is a huge fan favorite. It gets the biggest reactions, hands down. Due to the fact that the grip is your hand on top of the frisbee, it is the most challenging throw to learn. The execution comes from the proper use of momentum, the ability to have the disc push back against your palm to allow you to use generate the spin and power that is required.